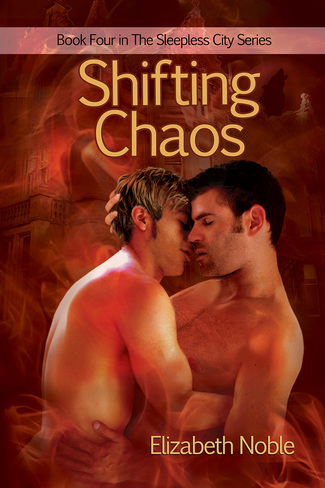 Chaos reigns in The Sleepless City, and it’s really beginning to piss Detective Jonas Forge off. He’s got inner demons to battle and a life to build with his new soul mate, Blair Turner. Nothing is going right, and he already feels the universe is conspiring against him when a turn of events he never saw coming flips his world upside down.

Hallucinations grip the town and everyone in it, threatening to tear their precariously built family apart, and the only way forward is to bare all to each other. This means Declan and Blair need to learn to accept one another. Lucas Coate has to move forward without ties to his werewolf pack and live a monogamous life with Declan.

But while Forge and Declan confront horrors from their shared past, Simon learns a terrible truth about vampires—one he couldn’t have imagined in his worst nightmares.

Forge chuckled, and Blair gifted him with another eye roll as they took up their places in the cafeteria line. He put his most charming smile on his face when a girl picked up a tray and joined the line right behind them. “Hello.”

Minor irritation skimmed the surface of Blair’s emotions, and Forge felt it plainly. The girl cocked her head and flipped her hair. “Are you new here?” she asked and brushed her hand over Forge’s. Her gaze raked up and down his body.

“I’m visiting.” They moved along the line, and he picked up a few dishes.

Forge leaned closer to Blair, dropped his voice an octave, and said, “I don’t work here.” He was using what Lucas liked to refer to as “Forge’s fuck me” voice.

“Oh,” the girl said. “Even better.” She inched close enough to rub her arm against his.

Forge basked in the tidal wave of heat, desire, and jealousy that swirled away from Blair to surround him.

Blair grabbed one of the dishes from Forge’s tray and put it back. “Don’t eat the mystery green stuff—it’s not broccoli.” He leaned around Forge, forcing him back a step, and spoke to the girl. “You’re barking up a very wrong tree. He’s gay. He’s mine. And it’s spectacular.” She stared at Blair for a few seconds before taking her tray and storming away.

Forge shrugged and picked up his tray. “Good luck with school.”

“Table,” Blair growled and pointed out the direction. “Over there.”

Trailing behind him, Forge feigned innocence. “I distinctly remember you telling me to be nice to the students.”

Blair dropped his tray onto a table. “Yeah, be nice. Not use that tone and your--badge—in a way that makes them want to undress and fling themselves at your feet.”

“You love me for it.” Forge sat down and surveyed his food. “We could go to the new pizza place.”

Blair’s chin dropped to his chest for a second. When he looked up, his eyes twinkled and he smiled. “You are a very lucky man. I don’t have time to go for pizza. It may be orgasm inducing, but they’re slow. Dinner there? Just you and me?”

“Oh, now you want a date.” Forge returned the mischievous and warm smile Blair wore. “And some of this spectacular stuff.” He waved one hand down his chest and laughed when Blair kicked him under the table.

The school food was possibly some of the worst Forge had ever eaten, and after two-hundred-odd years, he’d consumed a lot of food. However, he decided this had to be a regular thing. He liked meeting Blair for lunch and seeing a side to him Forge hadn’t known was there. Being Blair’s soul mate ensured their lifelong desire and commitment. It was the day-to-day liking each other they needed to work on.

Their meal finished, Forge walked Blair back to his office. Blair unlocked the door, and at the same time, Forge was doused in another wave of lust and something he could only describe as partnership. Most vampires experienced this sort of bond and empathy for one another during their initial mating. He’d understood the ability to feel each other so strongly diminished after one of them was marked. For them it seemed to increase. This was all new territory for him, and he was discovering how much he liked it, wanted it, and looked forward to it. Forge was indeed a very lucky man.

Blair used his hand on Forge’s chest to shove him through the door. He shut it behind them softly. One of Blair’s hands cupped the back of Forge’s neck, and Blair pulled them together, kissing Forge slowly, then slipping his tongue into Forge’s mouth, his fangs nipping his lip. Blair wasn’t usually the aggressor, and Forge adored it when he was.

He put one hand on Blair’s ass and held him close, kneading the firm flesh of Blair’s buttock slowly. All too soon Blair broke their kiss. They leaned against each other, panting. Blair trembled. “I have a late class,” Blair whispered. “Will seven be okay?”

Forge pulled in a deep breath, kissed Blair’s forehead, and nodded. “I will be there.” One more sweet kiss to Blair’s lips and Forge added, “I’ll call you later.” He dipped his head at the door and at the same time cupped Blair’s face, running his thumb lightly over his cheek. “Keep them in line. I’d better get back to work.”

Read the Reviews
I've been fortunate to have received some very nice reader reviews on Amazon and Goodreads. Thank you to all my fans who take the time to post a few words about my books.
blog tour

Sign up for my newsletter and keep with all my news.
newsletter sign up
All contents copyrighted