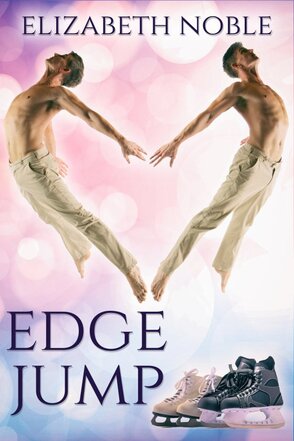 When the going gets tough, love is what will carry you through. One tragedy brings two men together, a second tragedy strengthens their bond and deepens their love.

Brett Rocha retired from pro-hockey while still at the top of his game. Co-owner of a chain of restaurants and an inherited ice skating academy, he seems to have it all. Despite his fame, wealth, and good fortune, though, Brett suddenly finds himself painfully alone.

Ex-Olympic figure skating star Rylan Hennessy transitioned to professional ice dancing with Celia, Brett’s sister and Rylan’s lifelong partner on the ice. Then tragedy strikes, and Rylan’s world is turned upside down, too.

Will their relationship survive, or will love be enough to see them through this life altering, harrowing change?

Bayou Book Junkie: Stacy gives four stars! I was totally invested in the story from the start and interested to see how the mystery behind what happened played out. Read the review.
Kimmer's Erotic Book Banter: Trio give four stars and says: ​Elizabeth Noble chooses instead to dive into how aspects of BDSM help Brett and Rylan cope with some intense issues that develop. The power play between the two men helps them explore their relationship and provides them with the tools they need to come through the tragedies they’re facing. BDSM helps them in more ways than one. Read the review.
Alpha Book Club: Cee gives 4.5 stars and says: I loved Rylan’s spirit, his tenacity and his directness. He knew his need for Brett and suddenly he was not on the shy spectrum anymore. Here was a man who was willing to lay it all at Brett’s feet and be mastered. Read the review.
Amy's MM Romance Reviews: Amy gives 4 stars and says: Edge Jump is well written, fast paced, romantic, hot, and faces some tough issues. I love reading about figure skating and some of the background stuff they have to deal with. I also enjoy that Rylan, the figure skater, falls for the big, tough ex-hockey player, Brett. It's a wonderful tale of opposites that is heart-melting. Read the review.
The Blogger Girls: Susan65 gives 4 stars and says: I love athletes, I love hockey players, I love ice skating and I am starting to warm up to BDSM. So, what’s a girl to do but pick up a book that has all of those elements, plus some. Read the review.
Archaeolibrarian: Merissa gives 4 stars and says: I thoroughly enjoyed this story, and found it to be very well written. Rylan is new to 'the scene', but already knows what he wants. Brett is scared at the thought of having a 'forever' someone, but isn't able to stop moving forward with Rylan. Read the review.
Merissa's review is also up on The Romance Reviews.
Love Bytes Reviews: Roberta says: The story starts off really well done…I mean, the way that these two men come together after the death of Celia, Brett’s sister and Rylan and the way that they come together…it was sweet and it was beautiful. The way that they leaned on each other and the way that they helped each other thru the difficult times. These men, these two men who came together in tragedy and from that…they made something beautiful. Read the review.
Divine Magazine: Debbie Attenborough give 4.5 stars and says:  You know, sometimes, you read a blurb, and your brain plots away, and that's what you expect from the book?? Then the book actually goes off in a way you did not see coming?? And you loved it for it?? This book, right here! Read the review.
Rainbow Book Reviews: Serena Yates give four stars and says: If you like romances with lots of obstacles, if a suspenseful murder mystery with consequences is your thing, and if you’re looking for a read that is part thriller, part character study, and part drama, then you will probably like this novel. Read the review.
I have been fortunate enough to have a number of readers offer comments and reviews on Goodreads and Amazon. Thank you to them all!
Available from these fine booksellers
jms books
universal link

​It wasn’t long before the others cleared off the ice to prepare for that night’s performance and Rylan was alone with Brett. Skating close to Rylan, Brett said softly, “You really were amazing, and you make that all look so easy.” He took Rylan’s hands and pulled him farther out onto the ice. “See, I can skate backwards too.”

Rylan laughed. Holding tightly to Brett’s hands he glided away from Brett until he stopped Brett’s progress then spun them slowly around. Brett almost lost his balance and tried to quick step a few times, except hockey skates had wider blades, but no toe picks for such maneuvers. Before Brett faceplanted on the ice, Rylan darted forward and wrapped both arms around Brett’s waist, bracing him.

“Hmm, you fell for my pretending to almost fall.” Brett pulled Rylan even closer.

“You would’ve landed on your face if I hadn’t saved you,” Rylan countered as they skated slowly, Rylan going backward this time.

“Says you.” Brett’s hands moved slowly from Rylan’s shoulder blades and brushed down his back. Rylan arched against Brett’s wide chest. Dipping his head, Brett nuzzled Rylan’s cheek, sprinkling soft kisses over his skin. His hands moved over Rylan’s round ass cheeks and he squeezed, murmuring, “You’re like a drug, addictive.”

Rylan shuddered when Brett’s fingers dug into the tender skin of his rear and he ground his pelvis against Brett’s. They did a slow spin and Rylan let his head drop back, exposing his throat to Brett’s mouth.

Brett gave a gentle push off the ice with one foot, moved one arm up and held Rylan about the waist in a powerful grip. “I loved watching you stretch and spin. That’s fucking sexy,” Brett said right before he scraped his teeth down Rylan’s throat. Rylan arched his back farther, letting Brett support his weight. Brett’s other hand gripped Rylan’s hair, tipping his head back even more while he moved his lips up and down Rylan’s neck, then sucking ever so lightly on Rylan’s Adam’s apple.

Rylan straightened and hooked one arm around Brett’s neck, kissing him. Slight pressure from Brett’s tongue and Rylan opened his lips far enough their tongues slipped and slid over each other. They’d stopped moving and were in the center of the rink. Brett’s fingers combed through Rylan’s hair a few times before he deepened their kiss and slipped the fingers of his other hand down and between Rylan’s ass cheeks, pressing against the thong strap of his belt. The sensation made him tremble.

The sound of machinery made them both jump and separate. Brett chuckled and took Rylan’s hand, leading him off the ice as one of the crew drove the Zamboni out. “I think they want to clean the ice and prep for the show. Ready to head back to the hotel?”

“Yes,” Rylan croaked. He tried to reach between down his sweats with his free hand but Brett grabbed his wrist, holding it firmly.

“Oh, no, you’re not doing that.” Brett shoved off with one foot, pulling Rylan after him and off the ice. “Are you wearing a belt?”

A slow, predatory smile spread across Brett’s face. “Good. Leave it on.”

After collecting Rylan’s belongings from his locker, they made their way to the parking garage and Brett’s car. Rylan’s hard-on had cooled off a little by the time they were on the street and on their way to the hotel. That cool down didn’t last long. Brett’s palm came to a firm rest between Rylan’s legs and his thumb brushed back and forth then rubbed in small circles. Rylan slipped down in his seat and spread his legs, so Brett had more access, enjoying the way his erection was held in his belt.

“Wow, that… crap I never thought of a dance belt as a sex toy,” Rylan’s words were breathless, and he panted them out.

When they came to a red-light Brett glanced over and snickered. “Damn, that thing really keeps you held tightly. I think this has potential.”

“Uh huh,” Rylan sort of moaned out the sound. He took a deep breath and concentrated on quieting his arousal. “Th-that’s sort of th-the p-point.”

At the hotel, Rylan walked quietly beside Brett and waited while he opened the door, then followed him inside.