The connection between Nick and Todd is just as strong as ever. The fact that they continue to handle the Slave/Owner aspect differently from the norm, still becomes an issue at times however.Read More. 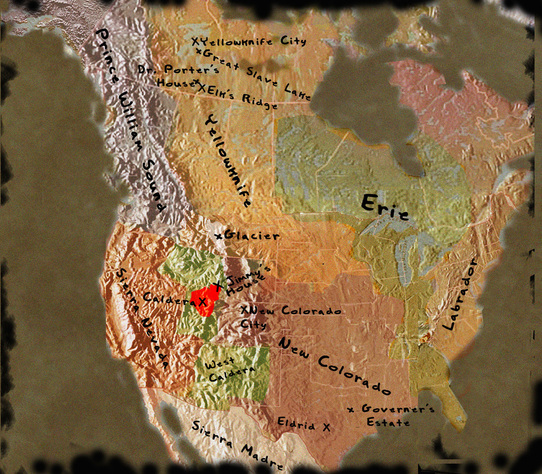 
Wars are fought on many fronts.


A battle is raging across New Colorado Protectorate with both human and demonic players. Todd and Nick Ruger are sentries with an arsenal of talents and training to combat threats from a variety of enemies.
Todd and Nick are given a mission to find and stop weapons smugglers by going undercover on the riverboat, Annabelle. These aren't typical arms dealers, they're demons and they're not afraid of a pair of sentries. The Rugers will have to use all their skills and their most powerful weapon, the bond between them, just to stay alive.

Stopping the supply of illegal weapons turns to trying, and failing, to thwart an assassination. Todd and Nick have each other, but will they be able to keep their love intact?

"We-well ... I ... um, don't --" Nick pretended to stammer. He swayed slightly, hoping he looked buzzed enough to be vulnerable.

Mr. Snow stopped next to their table, picking out a cue stick.

Snow ran his fingers up and down the length of the stick. "That is, if Luck here can't offer something of value to keep me from taking payment from his owner's hide."

The shudder Nick suppressed was real. He wanted to run away when Snow got close to him. The hair on Nick's arms and along the back of his neck prickled and rose. When Snow's eyes flashed red for a split second, Nick had to consciously work to control his breathing.

Nick rubbed one hand up and down his pant leg while gripping his cue stick tightly in his other hand. "Maybe one more game."

Mr. Snow smiled and nodded to the attendant to rack the balls.

Nick inched closer to Mr. Snow, dropped his gaze to the floor, and said in a voice just above a whisper, "May I break, sir?"

"Might as well let the kid, it's the only shot he's likely to get to play," Leo chimed.

Snow nodded and lifted one shoulder in a small shrug. He moved to a position behind Nick. "Sure, why not. The view from back here is good enough I could look at it all day."

He wasn't sure why, but Nick suddenly wanted very much to win the game and beat this creep. The desire was overwhelming and clouding out his other thoughts. "Thank you," Nick said and stepped into position at the table. He straightened to his full height, squared his shoulders, twirled the cue stick between his fingers, then bent down for his shot.

A nod to the attendant and the rack was removed from the cluster of billiard balls. Nick's arm was in motion a split second later. The end of his stick hit the cue ball fast, sure and accurate. It was a blur skimming over the felt of the table as it crashed into the triangle of balls, splitting them. Four balls went straight into pockets.

Leo barked a laugh and quickly looked down and away, covering his mouth with his hand when Snow turned a glare on him.

Nick shifted his gaze to them for a heartbeat before calling out two more balls, and he promptly sunk those as well. He moved to the side of the table and called out three more balls. Again, the balls went straight to the designated pockets and disappeared.

Mr. Snow stepped up beside Nick. He was so fast Nick barely had time to register the movement. Snow's fingers were twined in Nick's hair, and his head was yanked back before Nick could react. "Figured me out yet, boy?" Snow snarled in Nick's ear. "Let me help you."

Nick's vision whited out, making him blink. When he opened his eyes, he struggled to remember what he saw was a hallucination. He was with Adam in the hotel where Raleigh had kept them. "Jah'lar?" Nick exhaled the word. The effect wasn't the same, though the memory dredged up was clear enough.

"I might have had to give up some abilities for others, but this does give you the idea," Snow growled in Nick's ear.

"Dead? A pyrahni never dies, and where did you think some demons came from? I knew who you and your owner were all along, Nick Ruger."

The fingers in Nick's hair relaxed enough that Nick could twist away. He elbowed Snow in the side and backed up until they were separated by a few feet. Nick brought his knee up while at the same time smashing the pool stick across it, cracking it in two. Nick ignored the voices rumbling and the low gasps from people nearby.

Holding a broken stick in each hand, jagged ends pointing at Snow, Nick snapped out, "Bring it."

Snow laughed. He flung the stick and sent it wheeling through the air at the people around him, spun on his heels, and ran so fast to the exit he was a blur.

Nick frowned and cocked his head to one side. "Huh?" He let his arms drop to his sides, then called after Snow, "We're on a boat, you moron, there is nowhere to run." As he chased after Snow, he grumbled, "Why do they always run?"
Copywrite 2014