​
A found family of supernaturals protects humanity from the stuff of nightmares. 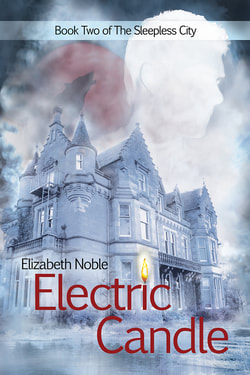 Release Date: August 18, 2020
When a vampire finds his soulmate, the bond is forever. It’s love at first sight.

If you like fated mates who aren’t perfect for each other, a paranormal killer who might not be caught and found families then you’ll love Elizabeth Noble’s Electric Candle.


Reviews:
Ilovebooksandstuffblog: Ashley Martinez gives 4 stars... A great fast paced and fun read! The beginning took a bit to get into for me but once I did I really enjoyed it. I loved the suspense and mystery. I can’t wait to see what happens next.

Mrs. Condit & Friends: Trish gives Electric Candle 4 sweet peas... This fascinating character driven whodunit has a smooth plot flow, and a cast of main and secondary characters that literally jump off of the page. Ms. Noble has given us a richly detailed, seamlessly blended world where ghosts, vampires, werewolves, and many other paranormal creatures live normal lives, unknown and unseen by most of the human population.  Read the review.

Love Bytes Reviews: Roberta gives 4 stars...This was a wonderful book to sit and spend a couple of hours on.  The characters and the mystery were really on point and kept me entertained the entire time.  No getting lost or thrown out of the story.  Just sat down and enjoyed the ride.  Can’t wait for the next one to come!!


﻿On Top Down Under Reviews:﻿ Kazza gives 4 stars...Electric Candle is a nice addition to this paranormal romance series. Book #1 was written by Anne Barwell and even though Elizabeth Noble wrote this instalment, they totally compliment each other’s writing style - the characterisations stay the same and the world building is further expanded upon. ﻿Read the review.﻿


﻿MM Goodbook Reviews:﻿ Pixie says...I recommend this to those who love paranormal mysteries, great characters who are both interesting and annoying, accepting new love and letting go of the old one, danger and desperate searches and an ending that piques your interest for the next book.


The ﻿Blogger ﻿Girls: Nikyta gives 4.5 stars! ﻿Forge ﻿and Blair are opposites but they complete each other and where one lacks something , the other makes up for that. I JUST LOVED IT! Read the review.


﻿﻿GayListBookReviews﻿﻿: Nina give B+ (Quad Shot of Love)! The world building was superbly done, ﻿﻿maintaining ﻿﻿and building on the world created in the first book. The new supernatural was interesting and fun. It highlighted some of the dynamics of soul bonds well. We learn a little more about the werewolves and meet a few more. There is definitely more story to be enjoyed there.  Read the ﻿review﻿.


Inked Rainbow Reads: Kara gives 5 stars! All together loved this book!  I would definitely recommend this book! Read the review.

Redz World Reviews: Redz give 5 shooting stars! Really beautiful character connection, and I loved the humor that is sprinkled in as well. You might find a paranormal that is just for you inside this story I know I sure did.  Read the review.

Queer Scifi: Ben Brock raves about Jonas Forge and says: The characters are entertaining no matter what they are doing, but that there are some broader themes that reading them in order may highlight. Read the review.


​
I've been fortunate to have received some very nice reader reviews on Amazon and Goodreads. Thank you to all my fans who take the time to post a few words about my books. 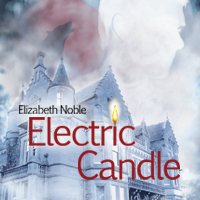 Icon and artwork by TL Bland. Please feel free to use the icon. 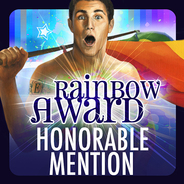 "This is a well written story that fans of this genre are sure to love. There are a couple of points that I really loved, one is that Jonas is not the perfect vampire, but one who suffers from allergies. The second is that rather than everything being perfect between Jonas and Blair, they have a bit of a rocky start. Also expect several twists and turns in this story, some you will not see coming. I hope the author plans on adding more to this world as Electric Candle was a well done story."  Judge comment.
Amazon

No one was there, yet Forge couldn’t shake the feeling he wasn’t alone. He wandered down the beach a few yards. Water splashing against the shore and spraying made him go closer for a better look. The lake’s edge here wasn’t gently sloping sand but a sharp lip of concrete. Hunkering on the ledge, Forge leaned over for a look.

The wall ran a good half mile in either direction. He could see large spots that were darker than the surrounding area. Forge had read about the secret rooms constructed all along Lake Erie during Prohibition. Illegal booze and guns were stashed in them. One could only access the rooms by going under water. At high tide, many of the outer parts of the rooms were completely submerged. He’d never been in one.

More than likely he’d have to get wet to justify the expense of divers. Forge was still contemplated getting a dive team in when he heard shouting.

The voice sounded familiar, but Forge couldn’t place it. That always made him nuts. Turning, he looked up at the top of the stairs. Then he squinted and shook his head. Who belonged to the voice made him stare in a type of horrified wonder, like one looked at a train wreck.

The fact his cock picked then to persistently remind him of its presence and give a few twitches and throbs didn’t help.

It was a man, though the horror Forge was feeling might have been less if it’d been a woman. He wore what appeared to be homemade steampunk goggles with dark lenses, a long sleeved black shirt, and black jeans.

“Sweet mother of God, is that a cape?” Forge muttered and took a few steps forward. “No, stop, don’t—”

It was too late. The oddly dressed man began to run down the steps—the slippery, wet steps, waving his arms. He’d gone about three steps when his feet slid out from under him and his rear hit the stone stairs. The man yelped, and Forge’s cock gave another twitch. He had the fleeting thought of how disturbing on several levels that was.

“What the hell?” Forge ran to the bottom of the stairs.

Bouncing head over heels down the steps, the guy finally flopped to one side and rolled the remainder of the way down, finishing his descent with a hearty splash in the chilly lake water.

Floundering and shouting, the man slapped the lake’s surface, went under, bobbed up, and spit water out of his mouth, and garbled, “Can’t… swim.”

Throwing his arms wide, Forge grumbled, “It’s not as if vampires drown.”

The guy went under, the water churned, but he didn’t come to the surface. Jerking his jacket off and dropping it to the ground, Forge made sure his phone was with the garment.

“This has got to be a joke. A really bad joke.” Forge ran to the edge and dove in. The only thing that prevented him from ejaculating the second his fingers touched the man was the cold water. He shuddered when he pulled the guy against his chest and wrapped one arm around him, using the other to help propel them to the surface.

When he got to the concrete edge, he hefted the guy over and onto the ground. Forge hoisted himself out of the water and hit the guy, who looked to be in his twenties, between the shoulder blades to expel lake water.

A shiver and spark of electricity ran from Forge’s palm and coursed down his spine to settle in his groin.

This couldn’t be his soul mate. Yet even as he finished that thought, he knew, and there was no denying what his body was telling him. The fool dressed as some superhero wannabe in a really bad outfit was Jonas Forge’s mate for eternity.

Forge wondered if other vampires would penalize him for killing his soul mate.