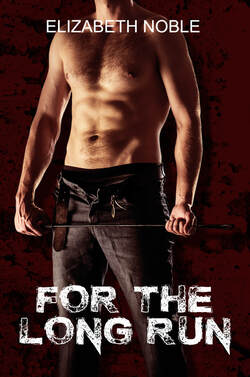 Cover Art by TL Bland
universal link
What if your life was a lie?

From the outside Jay’s life seems idyllic, a twenty-something, runs his family’s business with high disposable income and freedom. The reality, is Jay’s life is dictated by a bigoted, controlling, abusive father who insists Jay simply can’t be gay. Jay yearns for his own life with a dominant man, but it’s an out-of-reach pipe dream. When he meets trained Dom, Eric, the most Jay can hope for is the occasional one-night-stand or quick fling.
​
Eric has his heart set on Jay, and not only for more than one night. Jay is the type of sub Eric could easily spend the rest of his life with, fall in love with. While trying to navigate winning Jay’s love, Eric’s life is further complicated by chasing down a killer who may be something other than human.
When Jay is targeted, Eric wants only to protect him. Can he save Jay’s life and win his heart as well?
Excerpt: (Note: may contain sexually explicit scenes of a homoerotic nature.)

Eric wound one arm around Jay’s waist and pulled him upright, rubbing his cock between Jay’s cheeks and licking at his ear. “Hmm, I’d like that.” Eric’s free hand skimmed down Jay’s side and between his legs again, fondling his balls. “When I’m ready you may.” He pushed one oiled finger inside Jay up to the first knuckle, moving in slow, easy circles. Easing in farther, he crooked his finger and pressed for a split second against the sweet spot inside Jay, making his knees buckle.

A second finger was slowly pushed in, and Eric twisted and spread Jay until he was open, loose, and nearly whimpering. Eric pulled his fingers out and slowly turned Jay, drawing him close. Slanting his mouth over Jay’s, he moved a hand to Jay’s hair and held him still, swiping his tongue over Jay’s lips.

Jay sighed and parted his lips, the tip of his own tongue slipping out and brushing over Eric’s. In the next second, Eric’s tongue was inside his mouth, exploring everywhere. Eric tightened his arms around Jay’s back and parted his lips. Jay took the invitation, enjoying the warmth of Eric’s mouth.

Eric leaned away, ending their kiss. He held out a small packet. “Put this on me, now.”

As he’d done in the parking lot, Jay did a slow slide to his knees, dragging over Eric’s thick, muscular thigh. He took the condom packet Eric offered and opened it, peeled the condom over the head of Eric’s penis with two fingers, then used his mouth to finish the job. Eric’s hips canted forward, and he moaned, deep and long.

A small voice far back in Jay’s mind wondered would they ever know each other well enough to dispense with the use of condoms. Jay reminded himself to worry about here and now, not a future he couldn’t have. The way Eric’s eyes followed Jay’s every move, as if he were the only other person on earth, made warmth spread through Jay’s chest.

Jay swirled his tongue over Eric’s cock, delighted with the words and noises of pleasure coming from the man’s mouth. He picked the lube up off the floor, spread a generous amount on his hands and used them both to smear it over Eric’s cock. Hands gripped him under his arms and lifted, making him let go of Eric’s cock and urging him to his feet. “Bed,” Eric breathed out. “Now. Face down, legs spread for me.”

Jay stumbled and would have gone face-first into the carpeting had Eric not caught and guided him. Crawling onto the bed, Jay did as he was told and lay sprawled on his stomach, legs open and body wanting.

Eric’s weight pressed over Jay; his cock rubbed over his hole, making Jay’s breath catch and his heart stutter. Jay’s wrists were gripped in one of Eric’s hands and held over his head. Eric’s other hand pressed the back of Jay’s head, holding him firmly in place. Pushing slowly, Eric buried himself inside Jay, pulled out even more slowly, and then snapped his hips forward, thrusting in deep.

Jay lifted his hips, impaling himself on the thick cock within him, groaning and gasping, desperate for more. Eric set a fast pace, each thrust more powerful than the last, until he bent his head and bit down on Jay’s shoulder. A series of short pants and husky moans and Eric came, throbbing and pumping inside Jay.

Gripping Jay’s wrists even harder, Eric let his entire weight drop onto his back. Jay’s own cock felt like it was on fire from the inside, and his ass stung from the sweat between them. Every inch of his skin felt ignited. He tingled inside and out, desperate for more.

Eric’s pace slowed. He nipped at Jay’s ear, then whispered, “You are incredible.” His warm breath filled Jay’s ear. As he softened inside, he moved his hips in slow circles, brushing Jay’s sweet spot again and again. Forbidden to speak, Jay could only moan and sigh.

Chuckling softly, Eric eased out and knelt beside Jay. One hand pressed to his back, he leaned down and murmured, “Stay still, very still.”

His fingers replaced his cock, twisting, turning, brushing over Jay’s prostate until Jay thought he’d explode. Hand moving slowly over heated skin, Eric slipped his hand between Jay and the bed. He finally, finally, took Jay’s penis in hand, pumping in time with the movements of his fingers inside Jay.
“Are you ready?” Eric asked in a low voice.
​
“Pl-please, please.” Jay barely managed to get the words out of his mouth.