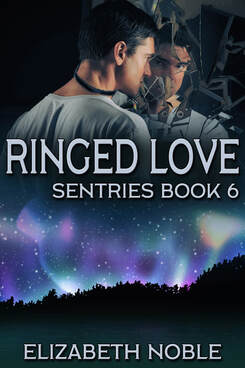 New Colorado Protectorate fell with the assassination of Chancellor Clarke. Like many others, Todd and Nick Ruger left the land of their birth and made a home to the north in Yellowknife. Their world was ever changing. The time came to say a sad farewell to some of their friends and loved ones, but they were taken in with open arms by others and in turn offered shelter to yet more. Through the years they remained steadfast in their duty as sentries to protect and defend those that needed it the most.

Time marches on but through it all they hold each other dear and cherish the love they've shared. There are still angry ghosts, Windigos and water spirits to contend with. Their lives change, offering them new roles. When the time comes, they do what sentries have done for generations prior and teach others the skills to carry on as sentries. The Rugers lives were rich and their hearts full with their devotion and love for each other. The tradition of the sentries lived on forever. It was the legacy of Todd and Nick Ruger. That was the way it was always meant to be.​

I've been fortunate to have received some very nice reader reviews on Amazon and Goodreads. Thank you to all my fans who take the time to post a few words about my books.

​Nick stood quietly to the side and watched the scene before him. Todd had a map spread out on the big table in Nick's clinic. That was the best place to gather the area sentries when they all had to meet. "Listen up, boys and girls, here's the plan." Todd pointed to different areas on the map as he talked. "There were three bad earthquakes in less than two weeks, and things are getting bad down there."

He nodded to one group of three people. Kids, really. When had Nick gotten so old that young men and women in their twenties and early thirties with families of their own seemed like kids?

"Patrol this region, here and here." Todd's blond hair had turned to a lush, light silver and he'd gotten a little heavier in the past few years, but he was as imposing as ever. He was still the powerful man who'd always protected Nick. This was the same man Nick had fallen in love with through exchanged letters even before the first day they spent together. The man Nick had later married. "You three, I want you to take this area. Ride straight through and get there as soon as possible. Contact the couriers right away when you arrive. Those people work hard, and we depend on them for our communication. Respect them and pay them well."

Nick glanced around at the group while he was busy preparing packs for these people to take. Their identification papers, as well as maps and money, were stored in small packs that would fit under their shirts. They were all so young, and many had never been on a big assignment until now. Had he and Todd ever been that young? Nick had been twenty-two the day Todd took him from the slave village, decades ago and hundreds of miles away.

"Drew, you'll take the last group here," Todd continued and tapped the map. Those going with Drew had the least amount of experience. When had Drew turned into this competent leader and their second-in-command? He was Todd all over again. Confident, in charge, with a never back down and always win attitude that made him a fine protector, and that's what sentries were. Protectors. Todd's gaze swept the group. "Remember, you've all earned your sentry tattoos, and in cases like this, those are also badges. We may have been at war with those people once, but that was before most of you were born. Today they need our help, and we'll give it to each and every person or spirit in need."

"Any dead you come across need to be liberally covered with iron shavings and salt, then burned. You all know there will be a lot of angry spirits, people who died suddenly and can't accept that change. This is how you'll help them. It's the only way. Focus on your training." Nick tossed small satchels on the table. "Everyone take one and keep it fastened to your belts."

No one ever disagreed that the New Colorado Protectorate had once had an excellent education system in place for the slaves born and sold there. Nick was instrumental in taking that model and implementing it in Elk's Ridge for the people there. He and Todd, later joined by Drew and his wife, Alexi, used the same educational model to train up-and-coming sentries. The pyrahni never did migrate north, but there were plenty of other preternatural beings they needed to contend with.

"Stay alert and watch out for one another. Listen to Drew and Alexi and do what they tell you, and you'll be fine. Remember, you're the law when there is no sheriff or militia, so act accordingly. Most of all, be sure all of you come back home." Todd paused and took a breath. "There could well be hundreds of injured and dead. I've sent messages ahead to the New Colorado sentry force, but I've gotten no reply, so there is no way of knowing their status. Work under the presumption you're all there is until proven otherwise."

Another hour of packing supplies, and they ushered their sentry force on their way south to the disaster zone near what was at one time the border between New Colorado and West Caldera. It was the same area where, decades ago, Todd and Nick were caught in an earthquake.

Once all the riders were out of sight, Nick laid one hand on Todd's shoulder and squeezed. "They'll do fine. You trained them well."

"We trained them well. Remember, most of them can throw a knife the way they do because of you. Most of them are also my deputies, so I'll need your help patrolling the city for a while."