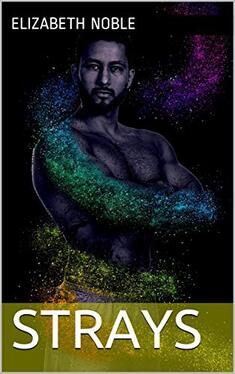 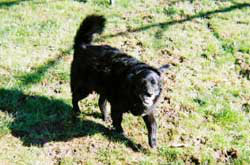 This lovely lady is Heidi and is the 'stray' I dedicated this book to. She came to me about six years ago and told me it was her time to leave on August 31, 2011.

Queer SciFi: Sharon gives four stars: Quite a bit is packed into this short read and I am glad it got a reboot! If you enjoy sci-fi/ fantasy, dystopian reads with MM pairings give this one a shot. Read the review.
MM Good Book Reviews
Queer Magazine Online
Black Raven Reviews
Man Oh Man Reviews
Joyfully Reviewed
Fallen Angel Reviews
JBP Reviews

The basics:
Kyle Anderson grew up with the lie that he was one of the last humans born. Then Kyle’s quiet, lonely life as a research assistant and student is shattered when he discovers the government has been lying to the world for more than twenty years. Now on the run from authorities who would kill for his silence, Kyle is taken in by Daniel Shanks, a member of a militia group dedicated to discovering the truth.

Daniel has seen death and violence in this new, radically changed society, and the closer he gets to Kyle, the harder his fears ride him. They will need to stop listening to the lies told by the government and start facing the lies they’ve been telling themselves, because the only place strays like them may be safe in this uncertain world is in each other’s hearts.

Kyle had a life, once.

Now he had a hiding place in some city he’d never been in and really didn’t want to stay in. It was cold, wet and windy here. The sounds of a partially iced over lake, one of the Great Lakes he thought, surrounded him. The past few days were a blur at the best. He’d always thought the fact he was one of the youngest people alive on the entire planet made him, if not special, then at least worthy of keeping alive. Why the pandemic that wiped out half the human race left every female survivor sterile, he had no clue. He’d been born weeks before it’d struck.

Two days ago he’d been a student, almost ready to graduate and working hard at his first job in his chosen profession. All that changed when he saw satellite photographs of something he should have never seen. Instead of doing the smart thing and keeping his mouth shut, he’d asked his supervisor about the photographs.

That led to him being arrested.

When the van transferring him to where he’d likely spend the rest of his life, or suffer his execution, slid on the ice covered road and into a ditch, Kyle had escaped. They hadn’t chained him, simply locked him in a wire cage in the back of the van. The sides split open when the van overturned, forcing heavy branches and steel rails from the roadside straight through the vehicle’s side. He’d run, putting his long legs to good use and almost gotten away unscathed. One of the government agents fired at him, the bullet grazed the round part of his shoulder and ripped his jacket, the only bit of warmth he owned right now.

Stumbling, eyes stinging from the pain, lungs burning from exertion, Kyle kept on running. He’d never been hurt like that. It was the beginning of a line of firsts for him. Now, days later he was hungry and the only thing he’d had to drink was semi-frozen puddle water. His black tee and denim jacket were no protection against the cold.

Finding a spot near the outskirts of the city, Kyle wedged himself in a narrow alley between two buildings. Crouching low to the ground, he peered out from behind the wall. He’d been separated from his parents for so long he hardly remembered what they looked like. Even their whereabouts were unknown to him. None of his friends, if he could even call them that, would help, for fear of being implicated. Those people were more like coworkers anyway, not real friends. He was sure they didn’t really care what had happened to him. He didn’t know anyone his own age, though he knew some existed somewhere in the world.

Kyle wasn’t even sure what his crime was.

No food, no money and no way of getting help or supplies, Kyle was cut off from everything he’d ever known. He had no one, not even marginally, and was so afraid he was numb.

He tried to shove farther back along the wall of his hideout, but there was barely enough room for a six-foot-four guy as it was. When he heard footsteps, Kyle brushed his bangs away from his face, held his breath and tried to be still and blend into the shadows.

The guy walking down the street took Kyle’s breath away. In another time he’d have hoped this man was into other guys. Now he simply wanted to stay out of his line of sight. He wore drab green and gray clothing that was meant to blend in. Even his jeans were dark gray. He had short cropped, dark blond hair, a bit of a five o’clock shadow and intense green eyes.

Kyle took in every detail from the broad, muscled shoulders to legs almost as long as Kyle’s. He was probably a few inches shorter than Kyle. Only part of the pounding of his heart was from fear of discovery.

He couldn’t get caught, he couldn’t.

The man looked around. He squinted up into the twilight sky and twisted on his heels first left then right. Even though the man’s movements were casual Kyle couldn’t shake the feeling it was him this man was looking for, even though he didn’t wear the uniform of government agents. He carried himself like one. Kyle had seen enough of those people at the university and in the research facility where he’d worked.

A cramp shot through his leg and he hissed in a breath, shifting then wincing. The man turned and looked right at Kyle’s hiding place. Taking a few steps closer, the man leaned down, cocked his head to one side and stood straight again. The backpack he carried was dropped from his shoulder and gripped loosely in one hand.

Putting hands on hips, backpack dangling from his crooked fingers, he said, “Out, now.”

Not knowing what to do, Kyle stood on shaky legs, but didn’t move away from his hiding spot.

The man moved closer, reaching out and brushed his fingers against the blood stain on Kyle’s jacket. “You’re hurt.” He reached for Kyle’s good arm. “Come with me.”

Skirting carefully around him, Kyle saw a pistol sticking out of the man’s waistband. Using his good arm he darted in and made a grab for it. When the guy twisted away, Kyle kicked at his legs, grabbed the backpack and took off.

“Crap. Kid, don’t run!” The man yelled. “Why do they always run?” The man had shouted loud enough Kyle heard him despite running away.

Kyle didn’t look back. He gripped the stolen pack, there had to be something useful or sellable in it, and ran. Pulling air into his nose and blowing it out his mouth in huge puffs that turned frosty in front of him, Kyle used the panic from the sound of footsteps closing in behind him to create more speed. Swinging wide around a corner, he splashed through semi-frozen puddles—soaking his boots and socks—and headed in a direction he hoped would take him to somewhere deserted and with hiding places.

Cutting down an alley, Kyle swore under his breath. Fencing loomed up at the end of the narrow street. With his wounded shoulder he doubted he could climb very well, unless he got good height from a jump. Judging the distance, he stretched out his stride and leapt at the fence.

Fingers reaching for the chain link, they never connected. Something hit him across the back, hard. Kyle dropped to the ground, forced flat on his chest.

“Christ, you run like a freaking jack rabbit,” the man growled out, grabbed Kyle’s arms and yanked them behind his back making him gasp out a groan. “Well, if you hadn’t grabbed my stuff and run you wouldn’t be hurt right now.”

Hands tied, the weight lifted off his back and Kyle was hauled to his feet. Turned around he looked into the face of his captor then dropped his gaze to the ground and away from the anger in those mesmerizing eyes. “I-I’m sorry,” Kyle whispered. “I’m…I thought you might have food or water in your bag.”

The man eyed him up and down. “Are you lost?”

“How long have you been out here?”

Shrugging, Kyle licked his lips and tried to think. “Couple of days.”

The guy drew in a deep breath and let it out slowly. “Not really old enough to know better.” He rubbed one hand over his face then across the back of his neck. “You got a name?”

“Kyle.” When the man waved at him with a what else motion, Kyle gave him a small smile. “Anderson.”

“I’m Daniel.” He turned Kyle far enough to see his bound wrists. Taking out a knife he sliced through the bindings. “And if you run from me again I will shoot you. Got it?”

“Call me sir again and I’ll shoot you twice.”

“Did you get the part where I’m armed?” Daniel reclaimed his pack and stepped away from him.

Despite being pretty much scared out of his mind, Kyle grinned. Daniel looked him over again, face softening. Some of the fear and tension bled out of Kyle and he relaxed a small amount.

“Now let’s try this again. Come with me, I’ll get your wound cared for and get you something to eat. It’s almost completely dark, and we shouldn’t be out here. Especially you!”

Kyle stood there, not knowing what to do. “I thought…” his voice trailed off.

“No, you didn’t think.” Daniel took his arm, grip gentle but very firm. It sparked a feeling of safety through Kyle. He was led to a jeep parked a few blocks away. Daniel opened the passenger door and gave him a gentle shove. “In, sit, don’t touch anything and behave.”