A found family of supernaturals protects humanity from the stuff of nightmares. 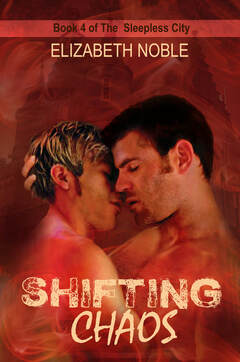 We aren’t a we without all of us.
​
Blurb:
Chaos reigns in The Sleepless City and it’s really beginning to piss Detective Jonas Forge off.

He’s separated from his soulmate, Blair Turner. A separation he fears might be permanent. Nothing is going right. It’s as if the universe is conspiring against him. A long closed off door buried deep within his psyche cracks open when a turn of events flips his world upside down. There’s a monster behind that door and he’s not sure where the monster leaves off and he begins.

Hallucinations grip the town and demons lurk around every corner, causing havoc and threatening to tear the family in Boggs’s Castle to shreds. The only way forward is to bare all to each other. While Forge and Declan confront horrors from their shared past, they all learn a terrible truth about vampires—one not even imagined in their worst nightmare.

Can they control a monster in order to defeat a demon?

Author's note: This book was originally published in 2015. It has been rewritten with new chapters and scenes and re-edited.
amazon
Excerpt:

Forge dropped his duffle and grabbed Blair’s arm, turning him to face Forge. Blair’s arms wound around Forge’s neck, grinning when Forge backed him up to the wall and pinned him there. Forge claimed his mouth, slipping his tongue between Blair’s lips.
​
When they broke their kiss, Blair licked Forge’s neck and nipped his earlobe. “I missed everyone so much,” Blair panted. “Ben, Lucas, Simon, even Declan.” He grabbed Forge’s belt and jerked him even closer. “I missed hearing the lake at night.”

Forge leaned back far enough to pull Blair’s thin shirt up and over his head then nipped at his jaw. “Yeah?”

“And Moose. I really missed Moose.” Blair moaned and tilted his head back, giving Forge complete access to his neck of which he took full advantage, tongue and teeth skimming along Blair’s throat and over his Adam’s apple. “Oh, tin man I missed you, my big, badass, vampire cop most of all.”

Forge stopped and leaned back. “Did you just quote the Wizard of Oz at me?”

Blair exhaled a laugh. “There was a movie marathon while I was packing last night.” He slipped his arms around Forge’s waist, shoved his knee between Forge’s thighs and stepped away from the wall, reversing their positions. Getting Forge’s shirt unbuttoned, Blair’s tongue blazed a trail from his collar bone to his navel then up to a nipple while he kicked his sandals off. “It was a political commentary,” Blair’s fangs skimmed Forge’s nipple, he nipped gently. “Oz is the…”

Forge got his hands between them and unzipped Blair’s boardshorts. “I read it long before you did. When it was first published, actually.”

Read the Reviews
Queer Sci Fi: Maryann gives 4 stars and says: Elizabeth Noble delivers lots of surprises and reveals with the final intriguing novel for “The Sleepless City” series. Read the review.
I've been fortunate to have received some very nice reader reviews on ​Amazon and Goodreads. Thank you to all my fans who take the time to post a few words about my books.

Sign up for my newsletter and keep with all my news.
newsletter sign up
All contents copyrighted